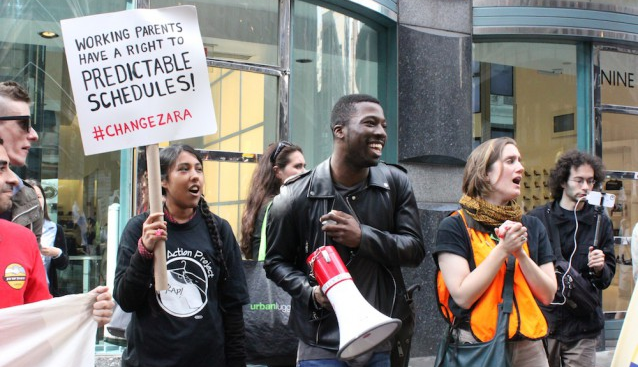 On August 2nd over a thousand workers at eight Zara retail stores in New York voted to unionize, and will now be represented by the Retail, Wholesale and Department Store Union (RWDSU) Local 1102. This marks the first time that Zara employees have unionized in the United States, and the move comes on the heels of widespread criticism of the company’s unreliable and exploitative scheduling practices.

In 2007, Zara employees in Quebec tried to join UNITE HERE in order to fight for increased hours and timely schedules, but were subjected to intimidation and harassment. Some pro-union workers were demoted or even fired. And Zara’s behaviour in Quebec was not an isolated issue. In 2014, an employee in a Manhattan store enlisted the help of the New York-based Retail Action Project to fight for increased hours for part-time employees and more stable schedules, engaging in direct action and gathering petition signatures in an attempt to force the retail giant to provide its workers with sufficient hours to survive. These actions were not immediately successful, but they did garner significant media attention and pressured Zara to reconsider its policies.

And the struggle is finally paying off. Zara’s parent company, fast-fashion giant Inditex, is the world’s largest retailer, and raked in a profit of over four billion dollars in 2015. Earlier this year, Inditex signed on to an agreement with UNI Global, an international union representing over 900 unions and millions of workers in the skills and service sectors. That agreement is based on principles put forth by the International Labour Organization and the Universal Declaration of Human Rights, and it requires that the corporation respect the right to freedom of association and maintain a policy of union neutrality. Because of the agreement, the company did not oppose the union drive and will respect RWDSU’s right to bargain on behalf of its employees.

Workers at Zara stores in New York have been fighting for increased hours and fair scheduling practices since 2014, and under the protection of RWDSU, their schedules will be provided in advance and their hours guaranteed. And it is likely that their success will pave the way for other workers at Inditex-owned companies across the United States – and the world – to unionize. The Retail Action Network congratulates the Zara employees, and we hope that our use of direct action tactics and our attempts to support workers in our community will similarly contribute to such large-scale change someday.