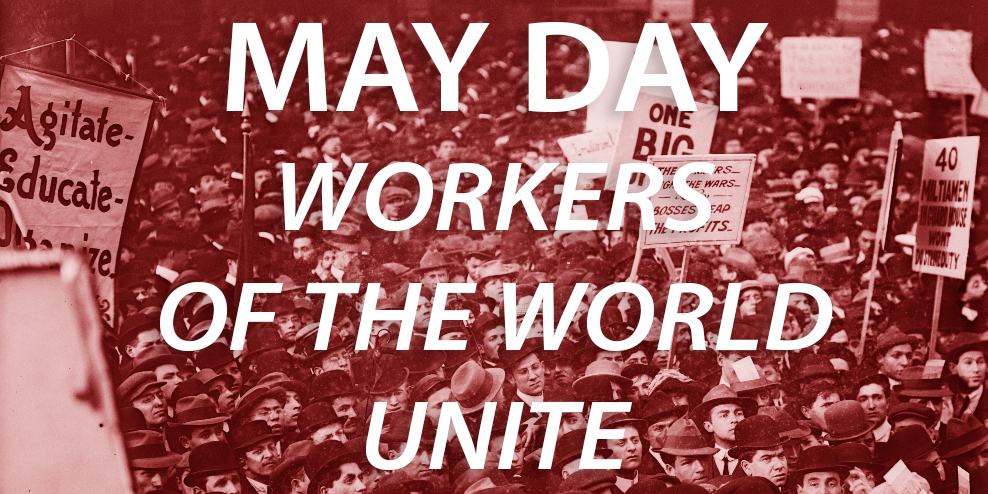 The First of May: The World Workers’ Day

Home » The First of May: The World Workers’ Day

Fellow workers! May Day, also known as International Workers’ Day, on the 1st of May, celebrates the international working class in solidarity across the world as we all struggling against the exploitation and oppression inherent in capitalism, as we all struggle for a better world of mutual aid, peace, and cooperation.

This day, no matter how many class-conscious workers are able to come out into the streets to sing and wave red flags and black, demonstrates the division of class in capitalist society: on the one hand, the vast majority, the working class, toiling for meagre wages to barely survive; on the other, the elite few, the bourgeois ruling class, squeezing the life out of the workers for profits to add to their absurd wealth.

Forced by the need to survive, the workers beg for the chance to sell their ability to labour for the bourgeoisie. With, however, the majority of people in the world being part of the working class, it becomes a massive competition of who can sell themselves better so as to gain a position from which crumbs can be obtained by the capitalists. This is the foundation of the divide and conquer tactic used by the ruling class (upon which race, gender, sexuality, ability, age, and more are used to tear us even further apart, thus making us, the exploited majority, less capable of challenging the power of them, the elite few). With so many in dire need to sell themselves to make ends meet, the rich employer is able to hire at painfully low wages, for if the potential hire refuses there will always be some other worker desperate enough to do soul-eroding work for nickels (sometimes called the reserve army of labour). So, even though by the workers’ labour all the wealth in the world is produced, the capitalists, since they own the factories, stores, materials, tools, and machinery, gain the wealth and with it power over the labouring masses. The former produces everything in society, the latter controls everything in society.

The workers across all races, genders, sexualities, physical/mental abilities, age, etc. stand for collective freedom from this bondage, whilst the bourgeoisie, so too of all diverse backgrounds, stand for the perpetuation of this domination which their all-consuming egotistical greed demands. Thus, the interests of these two classes are fundamentally antagonistic. Attempts may be made to reform the countless cruelties, but, since exploitation and oppression are essential to this economic system, mass struggle inevitably erupts again and again. If, however, we, the working masses, aren’t well organised in our attack as we arise for our liberation,  the masters of this society — as history has shown repeatedly — will unleash their most violent forces to crush us until we are too disheartening to challenge or too afraid to recognise the chains that bind us… that is, until the next eruption.

Many of the advantages we take for granted today were fought valiantly by our fellow workers of the past, many of whom made huge sacrifices, including their lives, in these eruptions. It wasn’t supposed angelic morality on the part of some tenderhearted capitalists, owning shops and swindling employees to ever-grow their monopolies, that brought about the end of child labour, 12- to 18-hour workdays, their ability to completely disregard workers’ safety, and so on. It was all of our toiling ancestors — the ones that built all we have today — united in action, that brought these changes which, at the time, seemed either too much to ask for or downright impossible.

These changes, however, weren’t enough for them, and aren’t enough for us. We are all still exploited for our labour. Each one of us still works for wages that amount to only a paltry fraction of the total value we create, and that surplus value (the profit) goes into the capitalist’s pocket. They then use the profit to invest in ways to even more efficiently exploit us — that is capital. This is where capitalism gets its name; its relentless hunger for capital, for more and more growth like a cancer. On a planet, such as ours, with only so much resources and so much room, this economic system is obviously an unreasonable utopia beneficial only to the excessively rich minority compelled by self-centred greed. As the majority of the world, though, the workers are capable of uniting to bring an end to this absurd system of violent exploitation and oppression, and build a new one where the motto “from each according to their ability, to each according to their needs” is practiced for the benefit of all.

A place to begin, this process of collectively changing the world for the common well-being of all, is in the streets on May Day. It’s there we can see those of us ready to organise together across all divides, ready to struggle against all exploitation and oppression, ready to liberate the world from the yoke and chains the capitalist elite force upon us, and ready to create society anew united for freedom, democracy, and peace. So come out if you can, get to know your fellow workers in your diverse community, share ideas and plans with each other, and sing L’Internationale!

Whatever you do, remember that, as a class of people, your fellow workers, diverse from all around the whole world, also strive for a just and equal society, much like you. Our common cause is one which has been struggled towards everywhere for over a century, but it can still be achieved at any moment if we all unite. In the unfortunate case that you end up unable to do anything this May Day, perhaps, if nothing else, just quietly hum and sing to yourself the last verse of the English translation of L’Internationale — well worth memorising for its lesson that no leader can liberate us; only we, the masses, ourselves can through united action — and let it inspire you for the future of international solidarity connecting all working people: