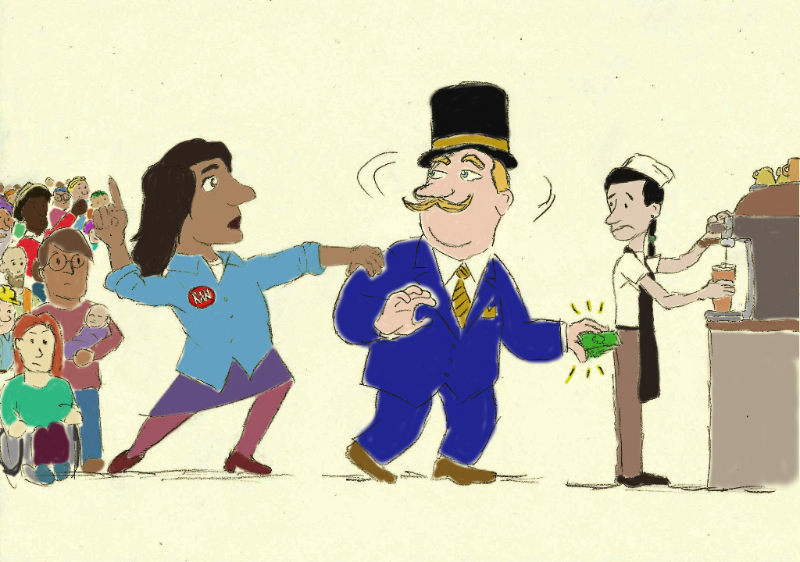 Professionalism: From Whom Should It Be Called For?

Home » Professionalism: From Whom Should It Be Called For?

It’s only the beginning of the campaign to retrieve the money legally owed by Wild Coffee to the abused worker, and we’ve seen significant weakening in the boss’s confidence. Their hope of getting away with the mistreatment they’ve inflicted is tumbling apart with each direct action done by the community at large organised by the Retail Action Network. Yet still, in a most embarrassing fashion, they throw their feeble tactics to ward us away. The boss, their subservient workers*, and the police cry out for decency, professional manners, even fairness, of all things, when working class members of the community stand in solidarity with the abused worker asking for what they’re legally owed. Is it truly this community, including the Retail Action Network, that is in need of these features, or is it those petulantly making these demands who are most in need of putting them into practice?

How the boss begs for mere decently, whilst in the next breath guiltily pleads, “it’s not true,” from the Wild Coffee door to each passerby — to each new customer they’ve lost. If it weren’t true, why would she throw a meagre portion of the money owed to the abused worker in an attempt to buy us out? As if the working class community can be bought out with less than is rightfully owed! Why would they contradict their story? Saying one moment they had done nothing wrong, then the next saying instead how they just didn’t realise they were doing anything wrong. Even if we have clarified to the honest swindler how they’ve swindled, they now know how to decently handle the situation which will bring an end to the campaign they find so abhorrent. Honestly, what is decent about a former boss calling the abused worker’s latest employer to speak ill in hope of destroying their ability to continue to earn a living?! Yelling and taking swipes at community members concerned about the exploitation of a worker is one thing, but to hunt down who the worker they abused is newly employed by and spread malicious misinformation purely to further harm the one they illegally paid below minimum wage to, such is done by one who has either forgotten what decency is or has never heard of it before!

How the subservient employees, l’amis des patrons, defend their benefactor, calling simply for professional manners! If such manners of professionalism were inherently exercised by the boss, then the abused worker would not have been abused in the first place! Still more, if professional manners were to be put into action by the boss after the abuse, then the boss would immediately pay what is owed in full and apologise profusely for their life threatening** mistreatment of their former employee. Of course, before any direct action took place, RAN peacefully contacted the boss to let them clearly know the situation, what they could (and still can) do to fix the problem, and what to expect if they don’t cooperate. Actions speak louder than words, and since our words have been ignored, our legal nonviolent actions past and future are justified.

How the police suggest fairness as they ridiculously attempt to bully away the community of supportive workers! Is it not unfair to abuse a worker out of pay (especially when they’re already scraping by with their below legal minimum wage earnings)? Is it not unfair to withhold this information from potential customers (most people would prefer not to give money to a place that so viciously mistreats their employees)? Is it not unfair for the community, many of whom are also low wage workers themselves, to collectively pull together $237 for this abused former employee of Wild Coffee in this difficult time (an amount the boss should easily be able to provide, along with the rest owed)? The only talk of fairness should be in regard to the fair, legal amount of money owed to the abused worker by Wild Coffee that is still being withheld from her.

In the end, as it turns out, professionalism is obviously needed most by those calling for RAN and the community to put it into practice. The Retail Action Network, with working class community support, have done only three actions so far. All have been lawful and peaceful. The actions have been done to show the boss that the abuse they’ve inflicted will not be tolerated, that a growing mass of people in the community support the mistreated worker and will continue to support her until the boss does the right thing. What is the right thing? Pay what is owed immediately in its entirety. It’s only the professional thing to do, the decent thing to do, the fair thing to do… at least that’s what the working class community has shown and will continue to show through direct action.

* It can be difficult for anyone to know whether the workers still employed are refusing to defend their former coworker in order to keep their job (i.e., their means to pay rent, groceries, bills, and other necessities) or due to truly being delusional friends of the boss (l’amis des patron), servants manipulated by their master. We, of course, have sympathy for the former, but we encourage them to recognise that they are just as capable of being abused by the boss as the abused worker we’re defending was, and so solidarity with her and other workers is the key to their collective strength.
** Allow me to reiterate, for it cannot be stressed enough, that withholding hundreds of dollars from a below minimum wage earning worker actively puts their life in harm; that money (a small amount in comparison to profits made by the cafe) is what the worker must use to pay for their rent, groceries, bills, and other necessities to maintain living!