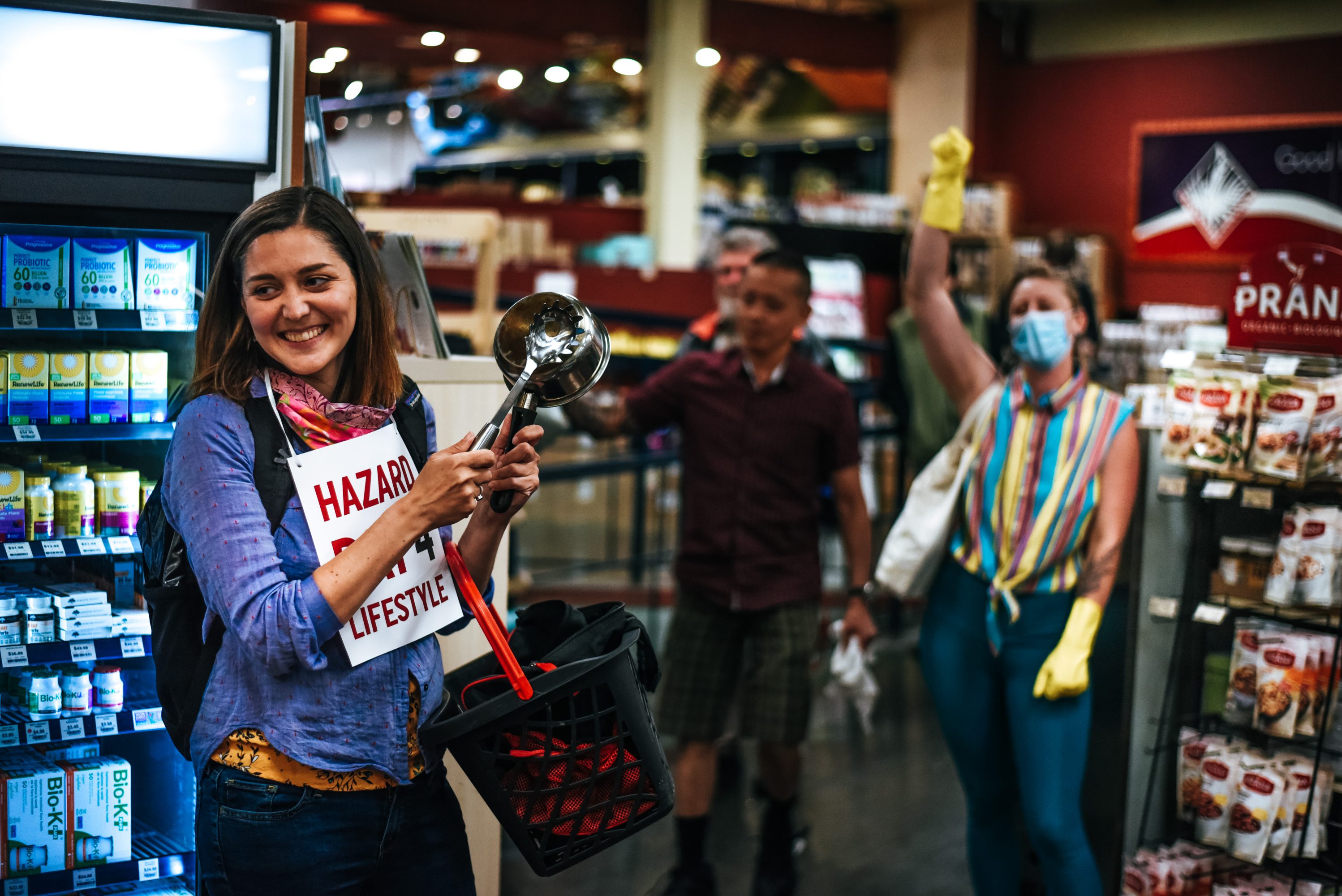 VICTORIA, B.C. – Twenty customers, supporters, and labour activists descended upon  Lifestyle Markets grocery store Thursday afternoon in a social distancing action to demand that the employer of Lifestyles Markets introduce hazard pay during the COVID pandemic. Activists interrupted regular business by banging pots and pans in an ode to the store’s essential service workers. Observing social distancing recommendations supporters set up around the store and occupied the aisles while participating in a “noise demo”.

The store owner Lorraine Peterson was present when the demonstration took place.

“We are weeks into a campaign, trying to get even the slightest response from the employer. They are ignoring the demands of the staff, and disrespecting our community in the process,” says Eric Nordal, a member of the Retail Action Network. “Hopefully a couple dozen pots and pans echoing through the aisles will get the attention of the management. We want them to know that it will not be business as usual so long as they neglect their employees.”

This week, Lifestyle Markets employees issued a final appeal to the owner, Lorraine Peterson, urging for a response but did not receive one.  On Wednesday employees delivered the general manager with a petition signed by over 280 community members calling for hazard pay and paid sick days.

All week customers and community members have been phoning and emailing the store, and leaving reviews and social media comments calling for hazard pay.

Meanwhile, companies across Canada including Save On Foods, Sobeys, Whole Foods, and Loblaws have introduced hazard pay for their employees.

A Lifestyle Markets employee says “we are surprised it’s taken this long to hear back from our employers”.  “We put our lives at risk everyday going to work as frontline retail workers while the owner is making record sales. We want to be heard, we want a decent wage.”

Lifestyle Markets staff recently voted to join the United Food and Commercial Workers, local 1518 (UFCW 1518) and are in the process of bargaining a first agreement. Despite ongoing negotiations, the Union Representative for Lifestyle Markets said that the employer does not need not wait until the end of contract negotiations to implement Hazard Pay.

“The employer has not responded to any of our requests for industry standard benefits and protections,” the Union Representative said. “Since the start of COVID-19, we have been asking for crowd control measures, hazard pay, access to personal protective equipment, presumptive WorkSafe BC coverage, access to child care, and a temporary ban on reusable bags. We have reached out to Lifestyle management on every channel with the workers’ demands. In a recent ruling from the BC Labour Board, Lifestyle was found to have violated the Labour Code after terminating an employee during the organizing campaign. UFCW 1518 has been successful in fighting to have the worker reinstated and paid for lost wages.”

Employees hope that Lifestyle Markets owners will stand with the community and grant them hazard pay and paid sick days.

Photos and videos
Video footage and photos can be downloaded at this link with descriptions in the file name.