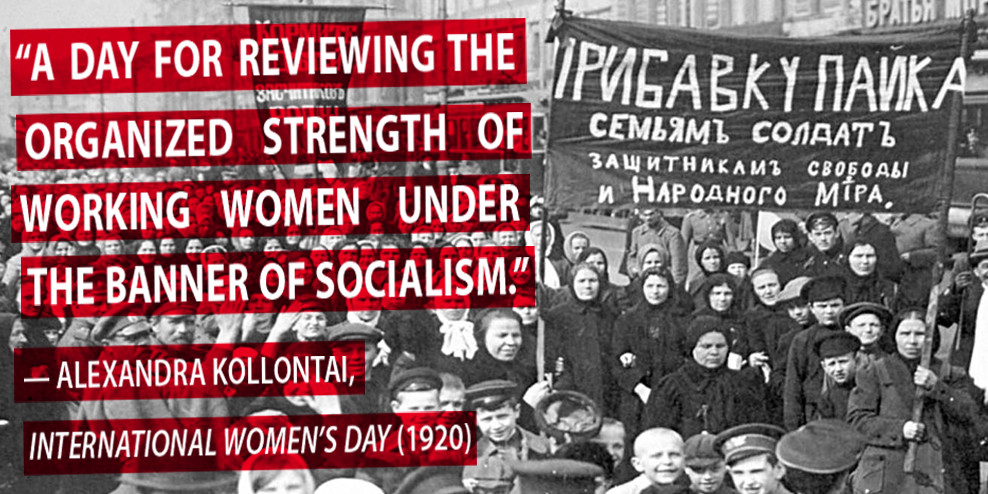 Appreciation of women, for all the amazing things they do, should not only take place on International Women’s Day; it should be a daily practice. Women have played a leading role in Retail Action Network from it’s beginning and will continue to in it’s future. We thank the women who have organised RAN, those who have shared their experiences and ideas in our discussion groups, those who have shown brave solidarity in the direct actions involving Wild Coffee, and those who took part in our first Working Class Wednesday event last month, not to mention those who will come out for the second Working Class Wednesday tomorrow evening. Each of you is integral to the community and it’s struggle towards a better world for all!

To celebrate this day we present below a shortened portion of Russian revolutionary Alexandra Kollontai’s 1920 article, of the same name as the day, which explains the historical development of this annual world-wide event.

Women’s Day or Working Women’s Day is a day of international solidarity, and a day for reviewing the strength and organization of proletarian women.

Not very long ago, in fact about ten years ago, the question of women’s equality, and the question of whether women could take part in government alongside men was being hotly debated. The working class in all capitalist countries struggled for the rights of working women: the bourgeoisie did not want to accept these rights. It was not in the interest of the bourgeoisie to strengthen the vote of the working class in parliament; and in every country they hindered the passing of laws that gave the right to working women.

Socialists in North America insisted upon their demands for the vote with particular persistence. On the 28th of February, 1909, the women socialists of the U.S.A. organized huge demonstrations and meetings all over the country demanding political rights for working women. This was the first “Woman’s Day”. The initiative on organizing a woman’s day thus belongs to the working women of America.

In 1910, at the Second International Conference of Working Women, Clara Zetkin brought forward the question of organizing an International Working Women’s Day. The conference decided that every year, in every country, they should celebrate on the same day a “Women’s Day” under the slogan “The vote for women will unite our strength in the struggle for socialism”.

The working women understood that it wasn’t enough to break up the stalls at the market or threaten the odd merchant: They understood that such action doesn’t bring down the cost of living. You have to change the politics of the government. And to achieve this, the working class has to see that the franchise is widened.

It was decided to have a Woman’s Day in every country as a form of struggle in getting working women to vote. This day was to be a day of international solidarity in the fight for common objectives and a day for reviewing the organized strength of working women under the banner of socialism.

The first International Women’s Day took place in 1911. Its success succeeded all expectation. Germany and Austria on Working Women’s Day was one seething, trembling sea of women. Meetings were organized everywhere – in the small towns and even in the villages halls were packed so full that they had to ask male workers to give up their places for the women.

This was certainly the first show of militancy by the working woman. Men stayed at home with their children for a change, and their wives, the captive housewives, went to meetings. During the largest street demonstrations, in which 30,000 were taking part, the police decided to remove the demonstrators’ banners: the women workers made a stand. In the scuffle that followed, bloodshed was averted only with the help of the socialist deputies in Parliament.

In 1913 International Women’s Day was transferred to the 8th of March. This day has remained the working women’s day of militancy.